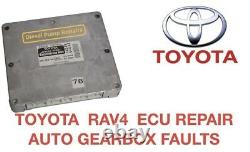 This RAV4 ECU is a very common fault for vehicles built between 2000 and 2006 causing transmission problems, the common symptoms are described as feeling as though the gears are slipping and then banging/jerking in to place. If it is an Automatic, 2000, 2001, 2002 or 2003 Toyota RAV4, either 4x2 or 4x4, then it is one of the affected models. If you have been to your local mechanic, you may have been told that the following fault codes where stored within the transmission: P0755 - Shift solenoid'B' fault','P0758 Shift solenoid B circuit electrical' or'P0750 shift solenoid-A'.

The above faults are normally a clear indication that your ECU has failed and needs replacing, we are able to rebuild your own unit. We don't accept previously tampered or opened units!!

This item is in the category "Vehicle Parts & Accessories\Vehicle Services & Repairs". The seller is "dieselpumprepair2" and is located in Rugeley. This item can be shipped worldwide.